Car insurance companies can drop you from a policy for a variety of reasons ranging from driving record points to office moves. They are not, however, supposed to cancel your coverage without adequate notification. 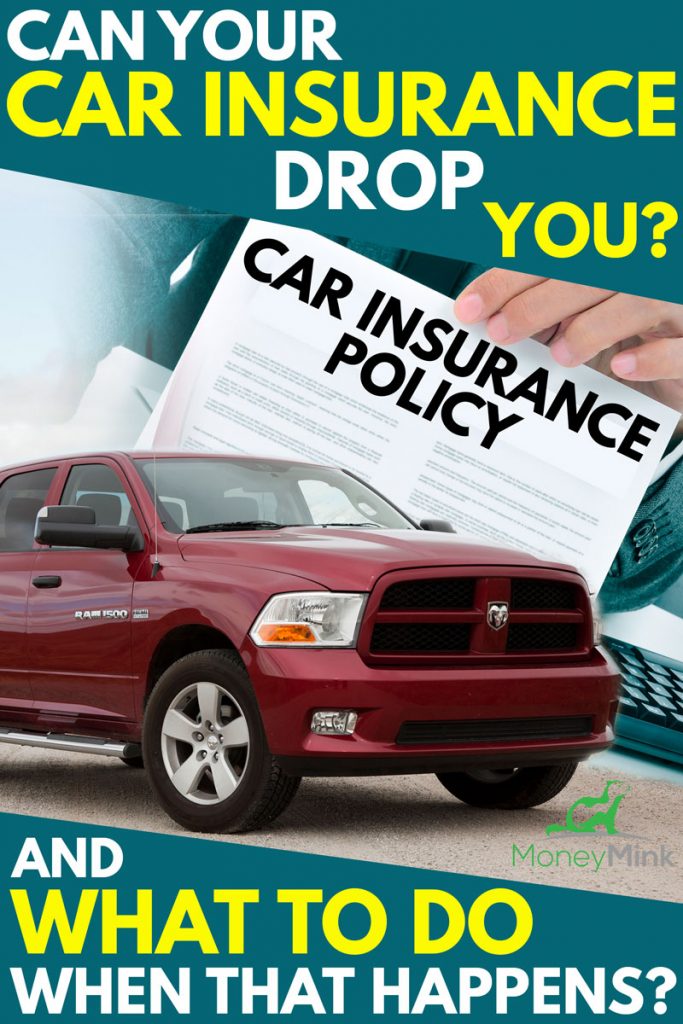 The reasons insurers drop you can vary widely, and it often depends on both the type of policy you have and the company’s rules. Here we’ll discuss the reasons why insurers fire clients and share stories of people who have experienced being dropped.

Can an Insurance Company Cancel Your Policy without Notice?

An insurance company is technically not allowed to cancel your policy without notice. Notification of cancellation or non-renewal is required by law—but each state has different guidelines on what constitutes adequate notification.

In some states, ten days’ notice is considered enough. In other states, it’s 20 days.

One potential way your policy could get canceled without notice is a matter of communication failure. For example, if you opt for digital correspondence instead of snail mail, your renewal or other emails could wind up in your junk folder. If that happens, you won’t receive the notice—but the insurance company has done its job of reaching out to you.

Can My Insurance Company Cancel My Policy for No Reason?

You might expect that because you received an offer of coverage from an insurer, the company has already promised to manage the policy. Unfortunately, that’s not always the case.

When you apply for a new policy with an insurer, you submit your credit, driving record, and vehicle information. The initial agreement you sign is called a binder, and it functions as a temporary contract while the company hammers out the details behind the scenes.

Until you receive the finalized policy, whether by mail or digitally, things can still change. From the coverage amounts to your monthly (or term) costs, everything can fluctuate until the final contract is issued.

Insurance binding periods vary by state, but most commonly, a 30-day term allows insurers to delve more deeply into your background and credit status. If they find something that causes them to perceive you as a risk, they can cancel during the binding period—even if your initial application for coverage seemed favorable.

Still, if your insurer cancels your policy, they should explain why. Sometimes, though, you will need to send a written request to receive that explanation.

Your insurance company can cancel your policy for many reasons, and this list isn’t all-inclusive. But these are the most common reasons why insurers cancel policies—along with stories from people who have had it happen to them.

Maybe you didn’t intentionally lie, but if your insurance application wasn’t accurate, it could get canceled during the binder period. Anything from misspelling a name or address to inputting vehicle information incorrectly can result in cancellation before your coverage goes into effect.

Also, misrepresenting yourself on the application is a significant risk, and something insurers are not sympathetic to. Plus, they do not need to consider any appeal if you have purposely falsified information.

You Didn’t Pay Your Premiums

Most people don’t intend to let their car insurance lapse. But these days, one missed email from your insurer can mean a canceled policy. Plus, you have to remember that policies come in different terms.

Some insurers have monthly plans, while most tend to offer renewal every six months. Other companies may give you the option (or even require) a full year of premium payments up-front.

If you change your coverage in the middle of the policy term, that can affect the premium amounts, too. Be careful when switching coverage levels or adding vehicles—you might incur extra charges that are due at odd times.

Note your renewal date and the remaining balance you owe and take care of it as soon as possible. If you miss the due date by even one day, your company could cancel your policy. One Reddit user commented that their insurer did just that. They wrote, “Called the next day to pay, they told me I would now have to pay the penalty of an uninsured driver.”

Each company has its own guidelines for cancellations, so you might have a grace period for late payment. Another Redditor confirmed that they paid late, but it wasn’t a problem, saying, “I was like 3 months behind and still had 30 days to pay and I don't think I needed to pay in full.”

Timelines vary widely, of course, so checking with your insurer is a helpful first step before stressing over missed payments.

You Used the Car for Commercial Purposes

When you sign up for car insurance, you provide information that helps the insurer determine what coverage you need and how big of a risk you present. If you use your vehicle in ways other than what you state on your policy agreement, it could result in cancellation.

Using your car for commercial driving when you only paid for private driver coverage is one way to catch the attention of your insurance company in a bad way.

Many drivers work for services like Uber or Lyft without changing their insurance policies to reflect commercial driving, and it doesn’t always end well.

An entire Reddit thread revolved around an insured party being dropped from their policy because of driving for Uber with the insured vehicle. One commenter said, “The existing insurer dropped me like a hot potato after 35 years the moment I used the R [ridesharing] word.”

But while it’s frustrating to deal with, it’s well within the insurer’s right to cancel you based on your driving habits.

Further, if you get into an accident while on the clock with a ride-sharing service, your insurer can (rightfully) refuse to cover the incident. Fortunately, hybrid policies are often available for ride-sharing drivers. You just need to shop around for the best coverage and pricing scenario.

Technically, using your vehicle for commercial purposes is a form of violating the written insurance contract. But other, less noticeable, factors also influence whether your coverage continues.

For example, as one Redditor explained, insurance companies require you to disclose all drivers in your household, even if you’re not applying for coverage for them. One poster said, “My wife and I never had a DUI, no tickets, no claim but our daughter lives with us,” but their policy was still canceled.

But if the couple didn’t disclose that their daughter lived at home—and from the insurer’s perspective, may sometimes drive the family vehicles—that would violate their contract terms.

In short, if you breach the contract in any way, you can expect to be dropped from your policy.

You Become Too Big of a Risk

Insurance companies use complex formulas to determine what risk level you present. A combination of factors like your credit score, driving record, age, marital status, and vehicle make and model influences your risk level as well as the cost of your policy.

But because the contract language of your policy is written to cover specific conditions—such as you maintaining an impeccable driving record—the terms can change when you rack up driving points at DMV. The result is a canceled policy because you’ve become too big of a risk—even if it’s your first infraction.

A Redditor explained that they were dropped from insurance after filing a single claim after four years. The claim in question was a theft incident, for which the company paid out under $800—well under the cost of four years’ worth of monthly premiums, the insured party noted.

Unfortunately, the practice seems overwhelmingly common, with many other Reddit commenters explaining that the same or similar had also happened to them. While it’s a mystery how insurance companies calculate your perceived risk level, you should be aware that even the smallest claim can disrupt your coverage.

You might expect that if one driver on a multi-driver policy risks out of coverage, the other driver would still be covered. But based on many Redditors’ experiences, it seems that’s not the case. Like the parents whose daughter’s mere presence in their home caused contract issues, other drivers have had their coverage canceled because of the actions of others.

One driver, who was on his parents’ insurance, received a “wet reckless” conviction, canceling the family’s umbrella policy. Though the parents weren’t involved, they were still required to find a new insurer and reapply for coverage. For the convicted driver, finding suitable coverage afterward was a challenge, and the annoyance extended to his parents, too.

The Insurer Moved or Changed Procedures

One benign reason why your insurance company could cancel on you involves their business practices. Sometimes agencies or insurers decide to stop covering certain geographic areas or delivering specific policy types. If that happens, you should receive plenty of notice so that you can find a new company to work with.

Other times, the company itself decides to move. For example, I used to have insurance through an insurance broker in my city. But when the office decided to move, the company gave its clients the option of continuing coverage (and traveling to an office in another city to make payments and see an agent) or taking their business elsewhere.

The nice part was, there wasn’t a penalty for taking the cancellation option—which is the best we can hope for when insurance gets canceled.

What Happens if My Car Insurance is Canceled?

What happens next varies depending on the reason why your insurance is canceled. If it’s for reasons beyond your control, there’s no stigma attached to the cancellation. In other cases, it might be hard to reinstate or find new coverage because of your actions or driving record.

If your coverage is canceled in the middle of your policy term, you are due a refund from the insurer. However, if the cancellation is for nonpayment, you might be required to pay reinstatement or other fees before the policy reactivates.

Either way, you will need to apply for coverage—with the same company or a new one.

But a cancellation can also increase your coverage rates as you apply with other companies. Especially if there is a coverage gap between policies, you may face higher rates than if you had maintained insurance continuously.

If an insurer opts not to renew your policy, that shouldn’t affect your ability to find affordable coverage. Because there are a few scenarios that result in a non-renewal, it’s not something you should necessarily take personally.

At the same time, you’ll still need to seek new coverage—there just won’t be a penalty for it. And although dealing with insurance applications and policy contracts can be complicated and frustrating, the good news is, you can always try another carrier if your insurance company isn’t working out—or if they fire you.

What Happens When Car Insurance Denies a Claim?